Enjoying The Driverless Ride: How Motional Is Creating A Ride Quality Metric For Its AVs

When it comes to riding in a vehicle, there can be a wide chasm between “safety” and “comfort.”

Sometimes the safest action for a driver to take when another vehicle stops short is to apply the brakes fast and hard. But this sudden deceleration can result in an uncomfortable jerk forward for the driver’s passengers.

With rigorous and nonnegotiable safety standards, robotaxi companies like Motional are confident their autonomous vehicles will safely deliver passengers from Point A to B. However, there’s an awareness that passengers define ride quality differently.

“Safety is the most important thing. But folks aren’t going to want to ride in the car if it isn’t very comfortable,” said Kristen Tierney, a software engineer at Motional. “If the car stops quickly, and the riders jolt forward, it might be following the rules of the road, but it doesn't feel safe.”

Tierney is part of the Motional team charged with better understanding what “feels comfortable and safe” to passengers. They are creating new strategies to determine how much a robotaxi should accelerate when a traffic light turns green, or how sharp and fast it should take a turn, for example. Understanding this will help ensure passengers want to take a robotaxi rides again in the future.

“For robotaxis, there's really no industry standard on what scenarios or situations matter most to users when it comes to ride quality," said Eliseo Miranda, a product lead for autonomy. “We’re trying to understand the user experience as it's related to the actual motion of the vehicle.”

Part of understanding ride quality is learning how sharp of a turn the AV can take before a rider feels uncomfortable. Photo taken at Motional’s Las Vegas testing facility.

Motional has already demonstrated the safety bona fides of its cutting-edge autonomous vehicle technology, driving more than 2 million miles on public roads without an at-fault accident. TUV SUD, one of the world’s leading independent safety assessors of AV technology, provided Motional a first-of-its-kind endorsement to operate with an empty driver’s seat. The vehicles are also programmed to operate safely: they won’t speed, run red lights, or tailgate the vehicle in front of it, for example. And without a human driver, the vehicle can’t be driven while drunk, drowsy, or distracted.

Rider ease-of-use also informed many design choices for the Motional robotaxi, which will use the Hyundai IONIQ 5 as its base. Passenger research helped inform how the vehicle is summoned on ride-hailing apps, how riders start their trip sans driver, and how the interactive display screens work, among other features.

But, ultimately, the Motional team understands that rider comfort depends, in part, on how safe passengers feel while the AV navigates traffic without a human driver behind the wheel.

“You can build the best rider display and design the best vehicle interactions, but the minute the person feels nervous in the car, they won’t ride in it again, they’ll choose the human driver,” said Tristan Dwyer, Motional’s director of user experience.

There can be noticeable differences between the way automated vehicles drive and the way humans do. The driverless vehicles accelerate and decelerate in a more deliberate, steady manner, for example. An AV taking an off-ramp may follow the painted line too closely from a rider’s perspective, resulting in a sudden turn. However, simply writing off these discomforting moments as part of the learning curve that comes with experiencing new technology could impact rider growth.

Like with any innovative commercial product, Motional’s engineers have been collecting user feedback on ride quality and comfort during test rides. But one challenge has been precisely and reliably identifying the sequence of events that lead to a moment when a passenger feels a ride was uncomfortable. 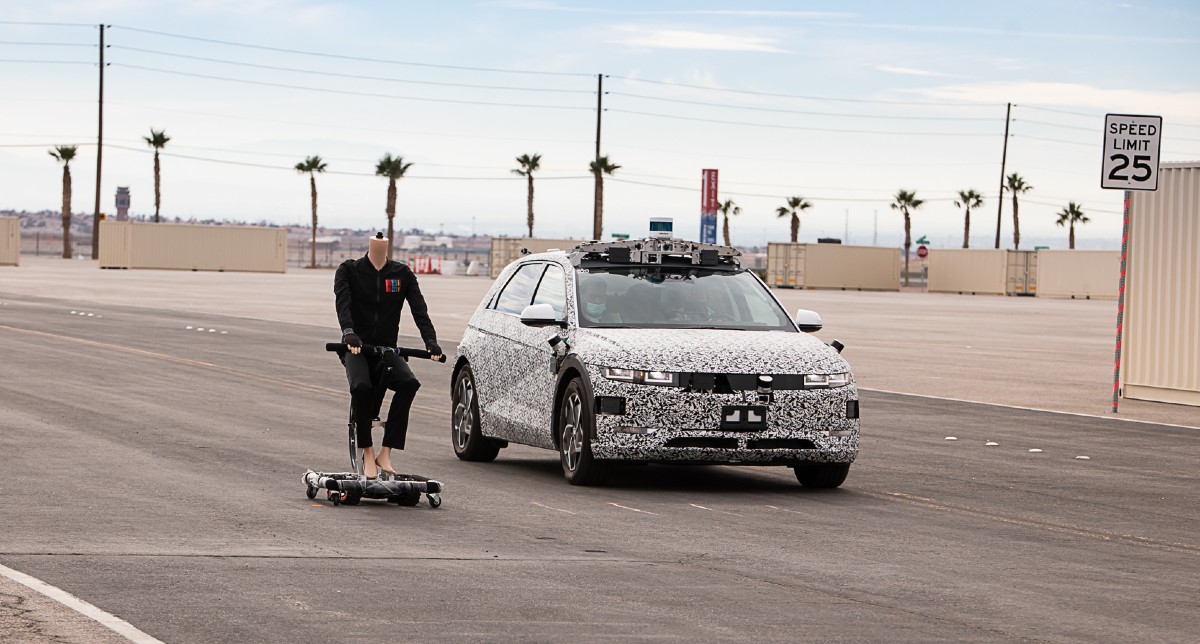 Motional engineers and scientists are working to understand how a passenger’s comfortability may change depending on the environment, such as if there’s a cyclist in an adjacent lane. Photo taken at the Motional testing facility in Las Vegas.

Eliseo said a passenger might tell them the ride was uncomfortable because the vehicle was traveling too fast.

"It ends up that it wasn’t the speed of the vehicle that was way too fast, because it might be going 35 miles per hour,” he said. “But when the road narrows and you have a bunch of parked cars, 35 can feel a lot faster.”

Or if a vehicle up ahead comes to a hard stop, the robotaxi can choose between stopping quickly, or making a quick lane change. Both maneuvers can be safe - but one may feel more comfortable to passengers.

“With AVs, it’s quite complicated to measure how well we’re doing on certain behaviors,” said Seungho Lee, the lead of the trajectory generation team. “Jerk and acceleration are easy to measure. For example, understanding how much lateral space is comfortable between vehicles not only depends on the vehicle-to-vehicle distance but also depends on the environment, such as a concrete wall next to you and road geometry.”

The Motional team is employing multiple strategies to learn how to best measure rider comfort. Some experienced, trained team members will use a tablet-based app to log uncomfortable moments they experience during test rides, for example. They are also using biometrics to better pinpoint those nerve-wracking bumps and jolts that ultimately add up and make the passenger uncomfortable. 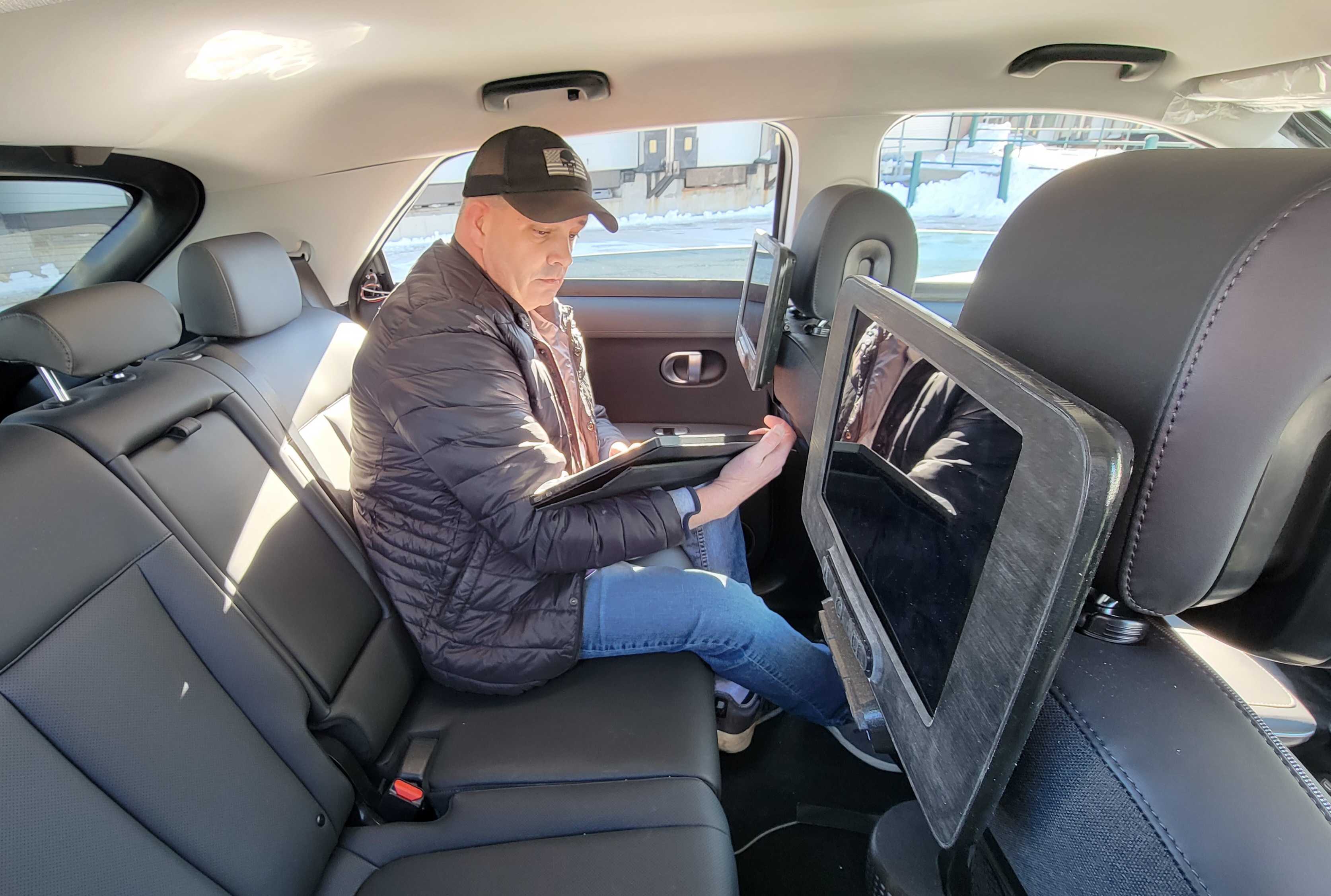 Chris Whalen, a Motional test operator, in the back of an IONIQ 5 test vehicle.

One other factor that makes this task more complex is that a safe, comfortable ride to one passenger may be an overly aggressive ride to another. The key is finding a happy medium.

“There is a certain level of common ground that we can emphasize that we’re pretty confident this would be comfortable with most riders,” Tierney said.

The team is using machine learning to find common ground from lots of driving data collected by test vehicles. Machine learning models could even be adjusted to take into consideration regional differences in driving.

“We can train one model for Boston and one for L.A.,” said Phuc Nguyen, a senior research scientist. “These tools allow us to be flexible and have one model or multiple models.”

The team’s work won’t wrap up when commercial service begins. Ride quality is going to be continuously monitored as Motional expands its fleet and moves into new markets.

The models that evaluate Motional robotaxis are updated through a Continuous Learning Framework, which uses machine learning-principles to make vehicles safer and smarter with every mile they drive. Rider feedback, especially from those using Motional robotaxis through ridehail apps, can help identify trips where the vehicle didn’t respond as well as expected.

Those incidents - maybe the robotaxi was cut off in traffic, or it tapped the brakes multiple times quickly while navigating an object in the roadway - can be used to fine tune the models and improve performance, said Haibin Lu, the lead of the metrics engine team.

“Our goal is to help make the car comfortable and safe,” Lu said. “That’s the goal of the entire team.”