When Motional was looking for professional drivers in Las Vegas to help test its self-driving vehicle technology, the company found a trove of talent. Turns out, the city’s constant need for limousines, private car service, and shuttle buses meant the region had a deep pool of candidates highly skilled behind a wheel.

“Las Vegas had all these experienced drivers we could tap into who knew all the casino properties, knew all the roads, all the ins and outs,” said Zeb Dawson, Motional’s Director of Fleet Operations for Las Vegas.

Pieces of what makes Las Vegas a unique place to work, live, and visit have also proven beneficial to Motional as the company prepares to launch its fully driverless robotaxi service in the city in 2023. The land and weather, the hotels and casinos, the crowds and conferences, and a business climate that embraces innovation, have all helped Motional accelerate the development of its autonomous vehicle technology. 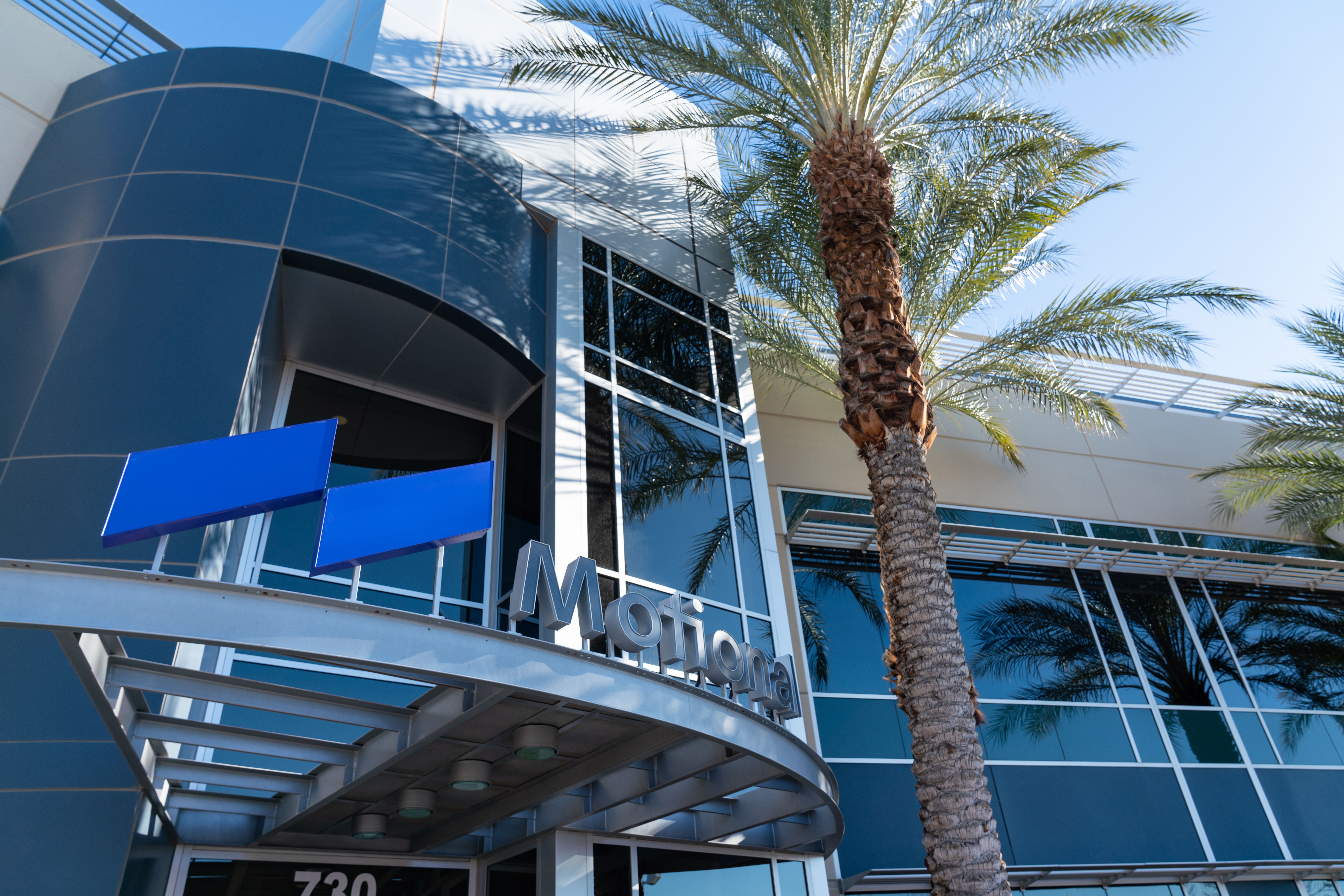 “We couldn’t have asked for better partners to help us change how the world moves than Clark County, the Regional Transportation Commission of Southern Nevada, and the City of Las Vegas,” said Abe Ghabra, Motional’s Vice President of Global Operations. “Our government partners in Las Vegas understand that autonomous vehicles are the mobility technology of the future, and they’ve established a first-rate, innovation-based infrastructure to help companies like ours grow and succeed.”

Motional ‒ which is a joint venture between Hyundai Motor Group, one of the world’s largest automobile manufacturers, and Aptiv, a global supplier of automotive technology ‒ announced in November that it had chosen Las Vegas as the first market for its new commercial, fully driverless robotaxi service.

“Through our Vision 2025 strategy, we want Las Vegas known as a global hub for high-tech innovation and enterprise, as well as a world-class hospitality and tourism destination. Motional has helped fuel the city’s thriving technology community and created hundreds of tech-industry jobs,” said Jared Smith, the interim CEO of the Las Vegas Global Economic Alliance. “The launch of Motional’s driverless robotaxi service is going to be an impactful proof point for Las Vegas as a technology testbed, and another exciting service for the region’s residents and visitors.”

Although Motional has a large research and development presence in Boston, where the company is headquartered, as well as Pittsburgh, Santa Monica, Silicon Valley, and Singapore, Las Vegas has emerged as a primary testing ground for the company's driverless technology. 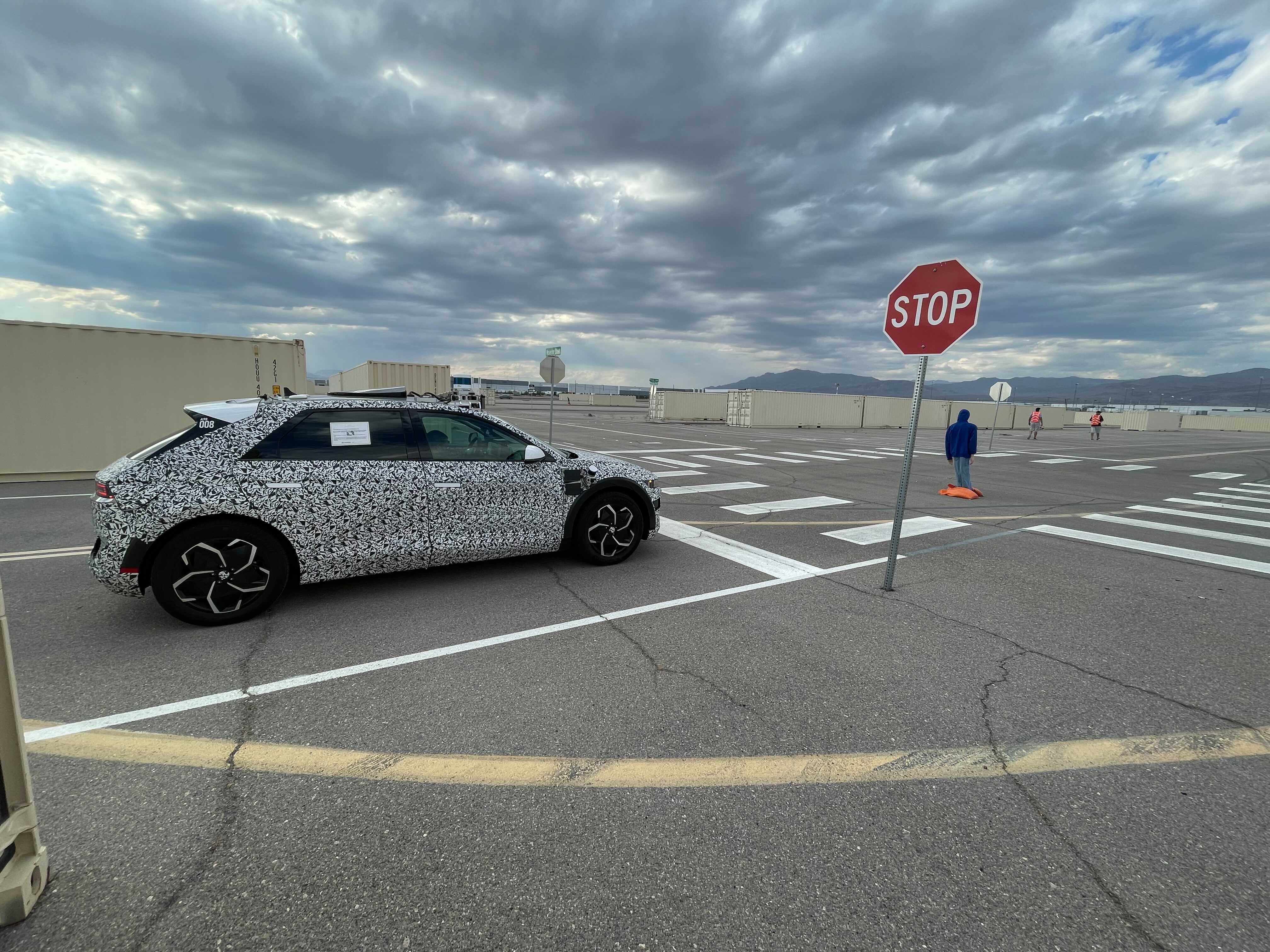 Motional is tripling the size of its Las Vegas testing facility, which can be configured in a number of different ways to replicate challenging real-world scenarios. This allows the autonomous vehicles to learn how to understand and navigate these types of situations safely.

The desert climate means Motional can test 365 days a year, unlike in Pittsburgh and Boston, Dawson said. The city’s street grid layout provides a different type of layout on which the company can train its systems. And with a steady stream of conventions, there’s always pedestrian traffic, a demand for rides, and riders willing to give feedback.

Then there’s “the weird stuff,” as Dawson puts it. Autonomous vehicles are already highly skilled driving on straight, wide-open roadways. But, like human drivers, the machine-learning powered technology behind autonomous vehicles needs to be taught how to interpret what its sensors are seeing and then plan a route that handles any odd or complex driving experiences safely.

“The environment is so dynamic in Las Vegas that it allows us to see all sorts of unique scenarios for our testing and data collection,” Dawson said. “The more unique situations, or what we call weird stuff, that we get to see, the better it is for us.”

For example, test vehicles in Boston can experience crowds of pedestrians waiting to cross a busy intersection. But only on the Las Vegas Strip may Motional vehicles encounter pedestrians wearing large feathery costumes or frequently encounter exotic cars.

“We may have a classic Rolls Royce going down The Strip and then a Lamborghini next to it, or a stretch limo, or all these things that we’re not going to encounter on a normal day driving through Boston or Pittsburgh,” Dawson said. 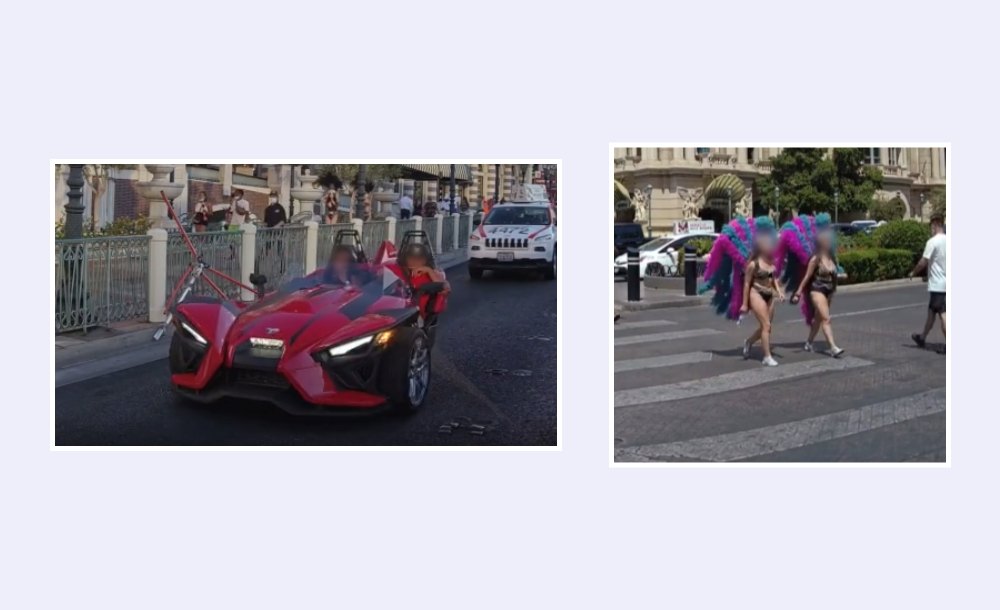 Unique sights, such as a trike motorcycle or dancers in feathery costumes, makes the Las Vegas Strip a great place to help train the computer models that allow driverless vehicles to operate safely on public roadways.

Las Vegas is also home to a number of important milestones for Motional. The city is where Motional launched its first robotaxi service, providing 100,000 rides to the public without a single at-fault accident. Of those trips, 98 percent of passengers gave the ride a 5-star rating. 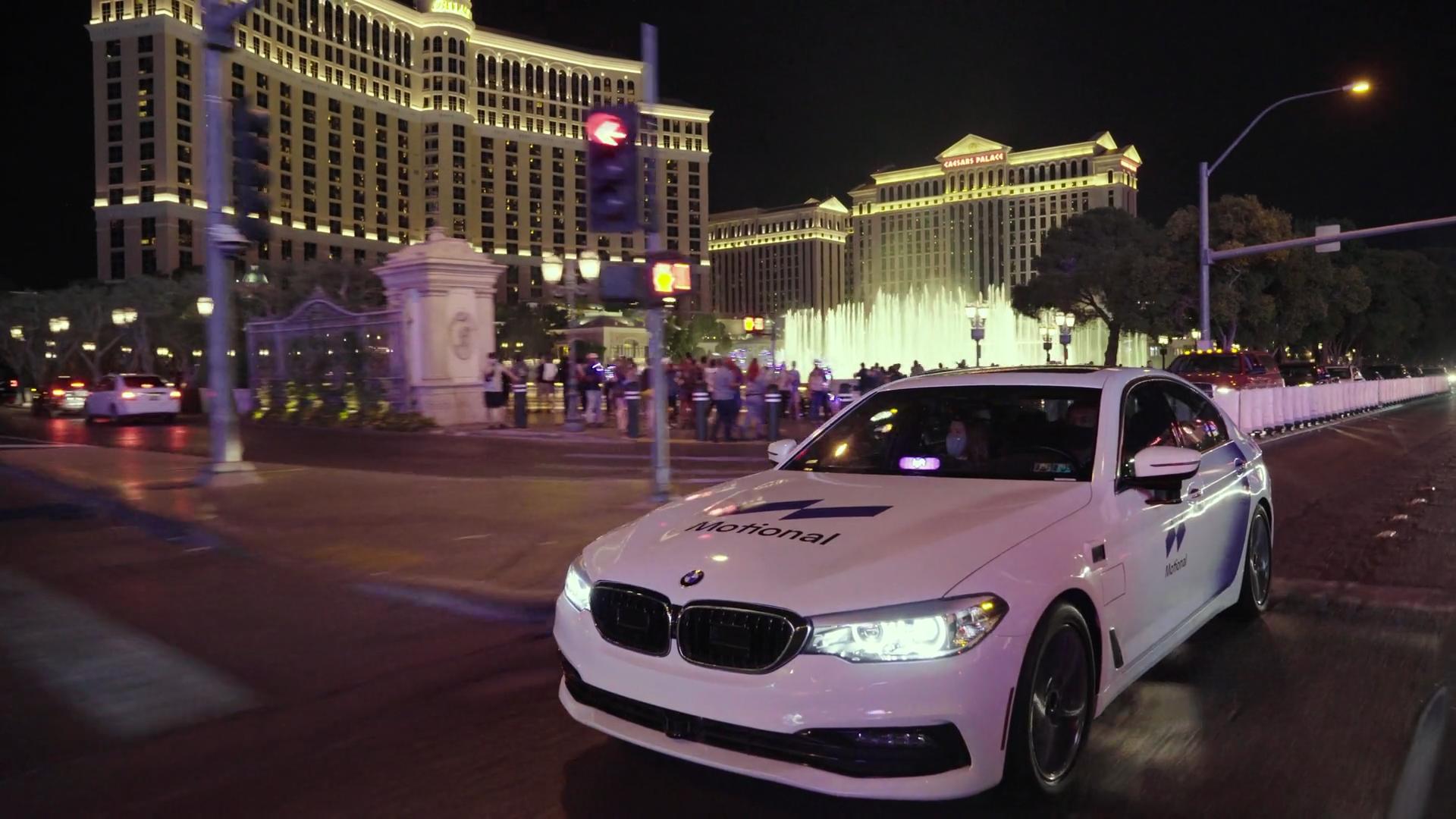 Motional vehicles, as part of a partnership with Lyft, has provided tens of thousands of rides to passengers in Las Vegas.

And due to the region’s abundant supply of land, Motional was able to establish it’s largest testing facility in Las Vegas. Motional recently announced it will be tripling the size of the facility, which features a closed course track that can be set up in multiple configurations similar to real-world scenarios, allowing it to significantly ramp up testing ahead of the 2023 robotaxi launch.

Motional is already testing its future fleet vehicle, the Hyundai IONIQ 5 robotaxi, at the Las Vegas track and on public roads. Engineers and designers from Motional worked with their teammates at Hyundai to design the IONIQ 5 so that the robotaxi can roll off the assembly line with all the autonomous vehicle hardware - including it’s suite of more than 30 sensors - fully integrated.

The IONIQ 5 robotaxi will operate at an SAE Level 4 autonomy, an international standard that means a human driver is not required in the vehicle. No consumer-owned vehicle currently operates on public roadways above Level 2 autonomy, which features some self-driving features, but still requires a human driver in the vehicle ready to take over the controls at any moment.

Dawson said the city has made its police and fire vehicles available to aid during simulation tests, and made the team aware of when roadwork would impact common testing routes.

In addition, Las Vegas hotel and casino owners have allowed Motional vehicles to use their properties to practice passenger pick ups and drop offs - a challenging but critical skill for robotaxis.

“What we’ve learned in Las Vegas, we can apply to other cities that may not have a casino, but may have public pickup areas,” said Jake Walters, Motional’s Senior Operations Manager. “Las Vegas is a great place to get a good baseline due to the dense traffic and all the pedestrians. These are the things we want to make sure we can interact with safely.”

Las Vegas also remains one of the world's most visited tourist destinations, with more than 42 million people visiting the city in 2019 (the last full, pre-pandemic year). Ghabra said this provides Motional with the opportunity to organically grow interest in robotaxi service in other markets via word-of-mouth.

"When people return home from their trip to Las Vegas, we hope that in addition to telling their family and friends about the casinos, restaurants, and shows, they also talk about the great experience they had riding in a Motional driverless robotaxi," he said.

Ready to join us? Search for jobs in Las Vegas and the rest of the world at Motional.com/careers.