Today, Motional and Lyft announced the planned launch of a fully driverless ride-hail service in Los Angeles. The service will use Motional’s all-electric IONIQ 5-based robotaxis and will be the first time that residents in Los Angeles can request an autonomous vehicle (AV) in the Lyft app. 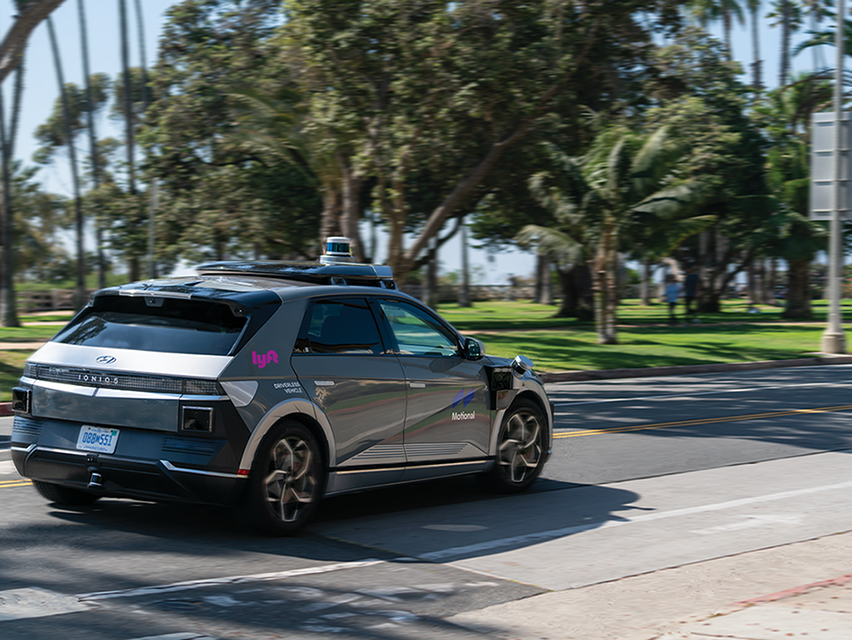 Los Angeles marks the second city in Lyft and Motional’s multi-city partnership, following Las Vegas, where the two companies are conducting public rides in Motional's IONIQ 5 AVs. By integrating Motional’s Level 4 AVs on the Lyft platform, riders in Los Angeles will have access to a rideshare network with multiple modes of transportation, which will include autonomous vehicles and classic rideshare, to get riders where they need to go.

“Los Angeles was the second city Lyft launched back in 2013 and it’s only fitting that it will be the second AV market we launch with our partner, Motional,” said Logan Green, Lyft’s CEO and co-founder. “Scaling AVs only works if riders can get a reliable ride, whether it’s autonomous or not, and together with Motional, Lyft will turn AV technology into transportation for Angelenos everywhere.”

“This is an exciting next step for Motional and Lyft as we bring robotaxis to Lyft riders in Los Angeles for the first time,” said Karl Iagnemma, Motional’s President and CEO. “Los Angeles is the second most populated city in the U.S. and represents a huge market opportunity for AV adoption. This service will build on the five years of commercial experience we already have with Lyft, and give Los Angeles riders a driverless experience that prioritizes safety, is affordable, and supports the city’s commitment to improved mobility.”

Motional and Lyft both bring strong knowledge of the Los Angeles market. Los Angeles is one of Lyft’s largest ridesharing markets and Motional has had an operations and engineering presence in the city since 2016.

Motional and Lyft see AVs contributing to an improved, more user-friendly mobility ecosystem in Los Angeles. Motional’s AVs have driven millions of miles in diverse environments, with zero at-fault incidents, and are developed to recognize and react safely to vulnerable road users, helping to create a safe shared road experience.

Safer mobility is especially critical in Los Angeles, where traffic related deaths increased 21% in 2021 and pedestrian injuries also increased 35%, which is why Motional and Lyft are working closely with local officials and organizations to realize the potential benefits of autonomous technology.  Based on Lyft's research, Californians have a higher interest in AVs compared to the rest of the country, which makes Los Angeles an attractive market to launch and eventually scale AVs.

“If we want to make good on our commitment to ease congestion while cutting emissions, we need to give Angelenos real alternatives to having their own vehicles,” said Los Angeles Mayor Eric Garcetti. “Motional and Lyft have been true leaders in shaping the future of mobility in our City – and we look forward to working closely with them to safely introduce autonomous vehicles into our growing list of transportation options.”

“Over the last few years, Lyft has introduced new transportation options -- from rideshare to bikeshare to transit -- with the goal of offering new opportunities to get around, opening the door to more advocates who will fight for safer streets in LA County and across the country. With the introduction of Motional’s autonomous vehicles to the Lyft network, we are excited about the potential of this technology to play a role in the transportation landscape to make the whole LA region a healthier, safer, and more fun place to walk and bike,” said Kevin Shin, Deputy Director at BikeLA (formerly LA County Bicycle Coalition).

Motional and Lyft will share more information on their Los Angeles service ahead of launch.

Motional will be exhibiting its IONIQ 5 robotaxi at The LA Auto Show today through November 27, marking the first time a robotaxi has been displayed at the show. Visit Motional.com/los-angeles to learn more.