Autonomous vehicles, known as AVs, are starting to show up on public roadways, and Brad Anguish has some questions.

Do the vehicles need clean lane markings to operate property? What if there’s a thin layer of snow covering up the markings – will they be able to continue their path?

The answers could have budgetary and policy implications for Anguish, who is the executive director of transportation and public works for Halifax, Nova Scotia. He was one of more than two dozen transportation planners, engineers, and advocates who attended a session hosted by Motional during the 2022 National Association of City Transportation Officials convention, held in Boston earlier this month.

Attendees of the session heard from President and CEO Karl Iagnemma, Chief Technology Officer Laura Major, and other Motional experts about the company’s driverless technology, approach to safety and accessibility, and the IONIQ 5 robotaxi, which is now operating on the Lyft network in Las Vegas. 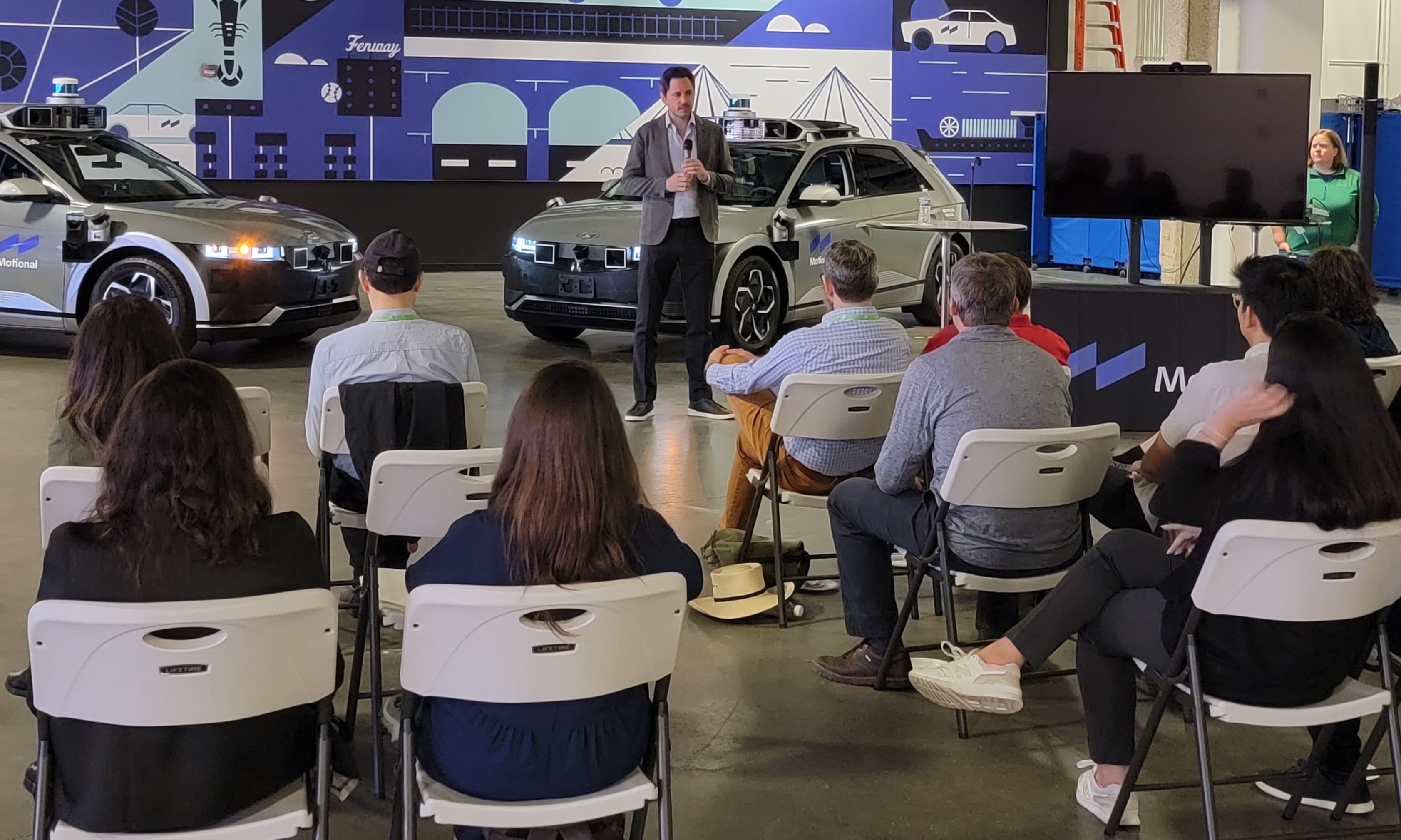 Iagnemma said Motional is looking to work with stakeholders, such as those in attendance, to make robotaxis safe, reliable, and accessible, and a positive for the community.

“We want to partner with cities to ensure predictability and reliability,” he said.

Major walked attendees through the IONIQ 5’s sensor suite and how the Motional uses vehicle-generated data to improve fleet performance. The system, known as a Continuous Learning Framework, uses machine learning principles to find unique or unusual driving encounters within the data and train the vehicle’s algorithms. 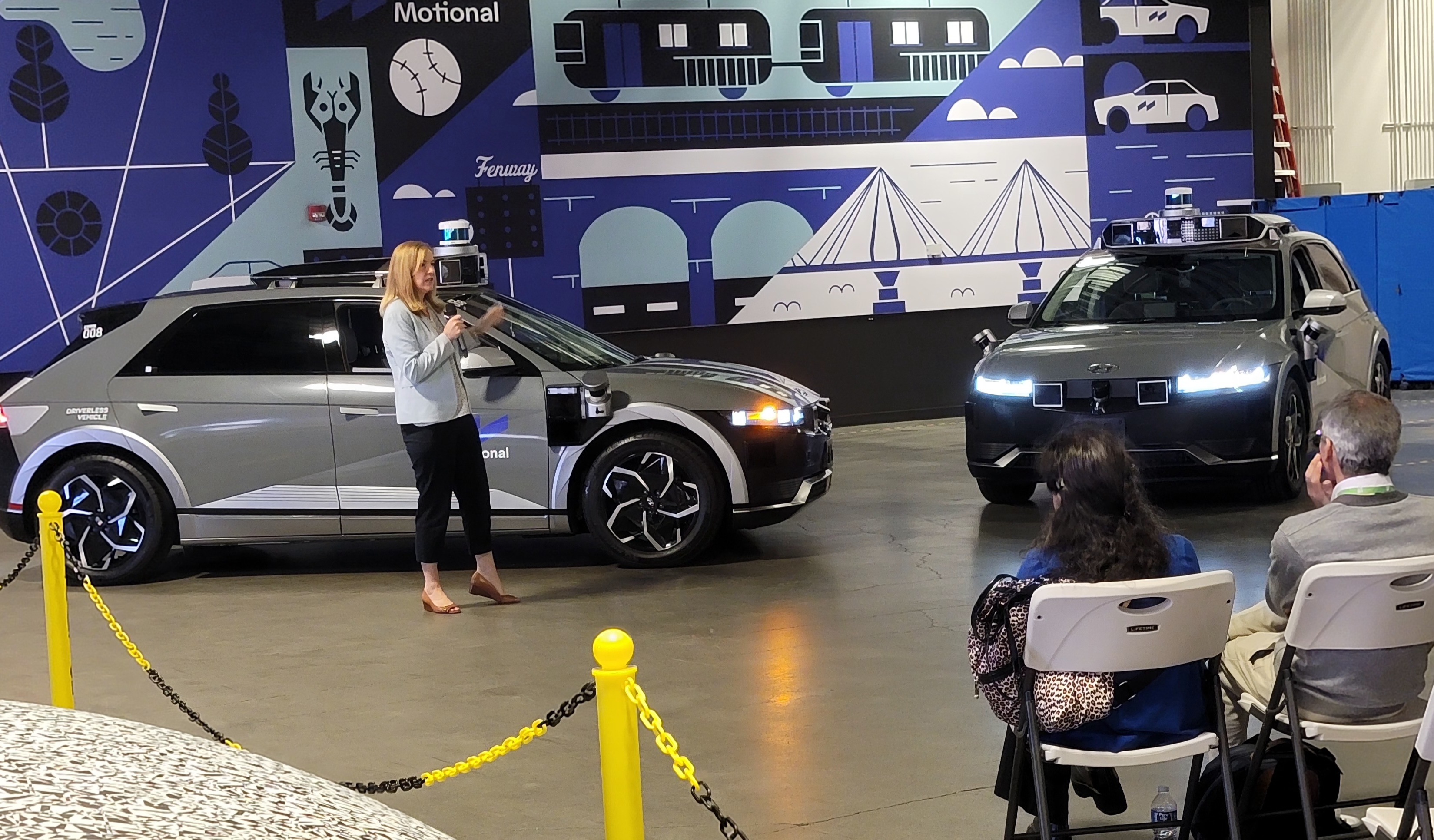 Paul Schmitt, Motional’s expressive robotics research manager, explained that pedestrians may be uncertain what to do when they see an approaching vehicle and no human driver behind the wheel. Using VR-based scenarios, Motional has explored using vehicle-mounted LED strips, enhanced vehicle motor noise, an exaggerated vehicle nose dip, and other movements to communicate vehicle intent to pedestrians.

“We’re studying what vehicles can do, show, display to help [pedestrians] with that understanding,” he said.

Vanessa Wiegel, Motional’s senior director in charge of user experience and human factors research, played video clips of people with disabilities explaining how challenging it can be to travel. She said the company started recruiting research participants with a variety of physical, sensory, and cognitive disabilities so that it could design features that increase accessibility early in the product development process.

“With other products, accessibility is more of an afterthought,” she said. “When we design for accessibility, we do so from the beginning." 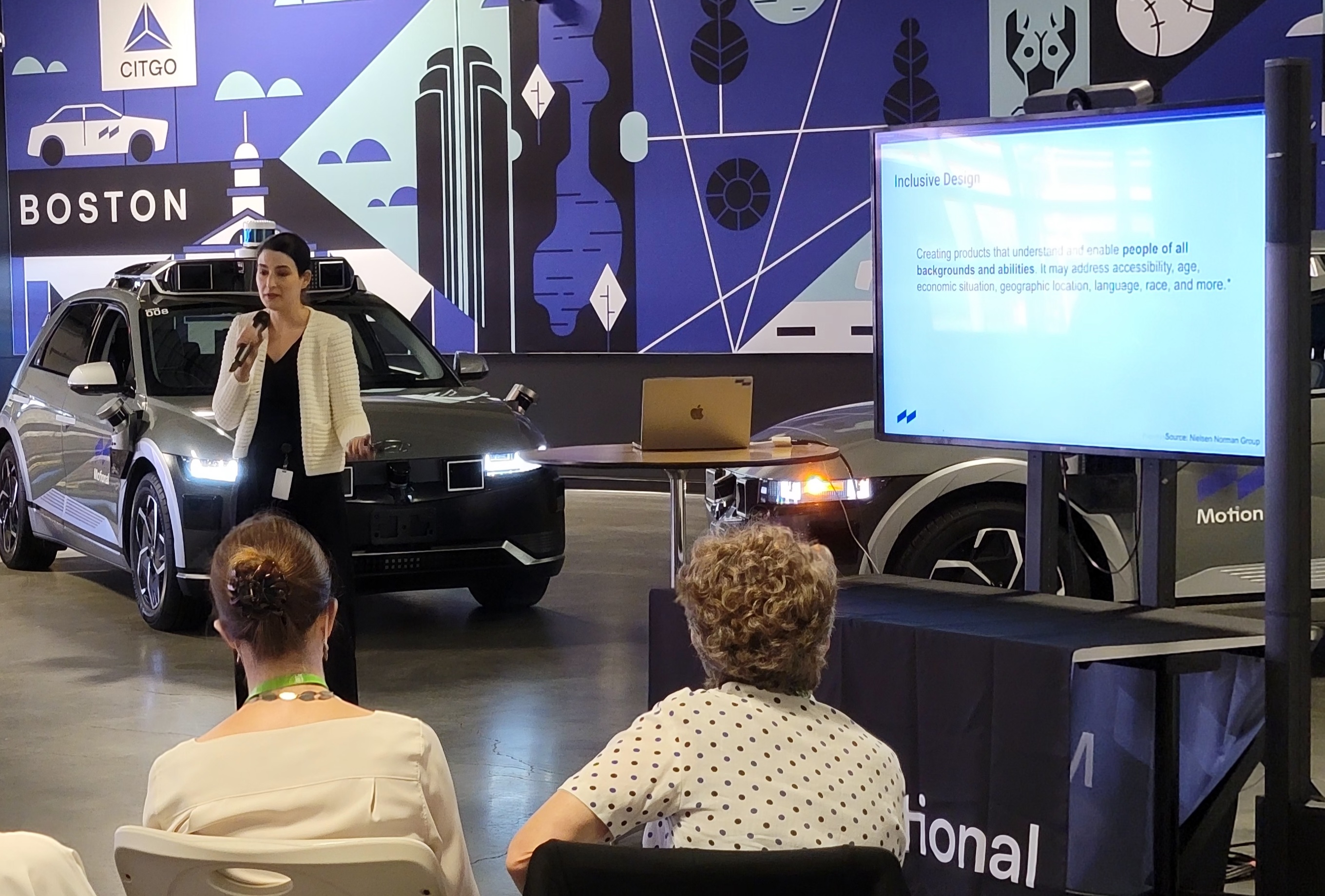 It fell to Schmitt to answer Anguish’s question about how faded or obstructed road lines would impact vehicle performance. Basically, there would be no impact, Schmitt explained, because Motional plots out all the roadways, intersections, and traffic infrastructure within the service area - known as an operational design domain – before the robotaxi ever makes a test run. This way the vehicle is equipped with an accurate, onboard map regardless of the road conditions.

That’s good news for Anguish, who currently lines the streets in the 500,000-person city with road paint instead of more durable thermoplastic road marking paint.

“We can go to thermoplastic, but it’s a lot more expensive,” he said.

One attendee asked what metrics Motional will use to determine when its vehicles are ready to operate without human safety operators.

Major said part of the challenge of developing groundbreaking new technology such as driverless vehicles, is also determining the proper ways to measure important details such as vehicle safety and performance. Currently, Motional is looking at a range of factors, including the number of times human drivers need to take over control of the vehicle, software latency, and how the various technical systems - such as those that control perception, prediction, and planning - perform.

Sam Wempe, Motional’s government relations director, was asked what driving laws need to be changed to accommodate autonomous vehicles. Wempe said the vehicles are currently designed to follow existing traffic rules. But the company is hoping to work with cities to create designated curbside pickup and drop off areas for robotaxis, since they aren’t able to double-park or ignore other parking rules like human drivers do.

Anguish wonders if autonomous vehicles, and their adherence to driving laws, could actually reduce some roadway infrastructure costs, or at least reprioritize where it spends taxpayer money.

“Every year we’re spending millions and millions on traffic calming infrastructure,” he said.