Traveling alone at night in a strange city can be nerve-wracking, especially for more vulnerable populations.

So it’s not surprising that when taking a ride-hail, some people would be interested in a choice between a driverless vehicle and a human-driven vehicle.

According to the findings of Motional’s 2022 Consumer Mobility Report,  35% said a driverless AV would “make me feel safer while traveling alone.” Another 33% said they feel a robotaxi would operate safer than a ride-hail driven by a human. And 31% said they would choose a robotaxi because they don’t want to interact with a human driver.

The survey, now in its third year, looks at the public’s evolving opinions about driverless vehicle technology. Data from the survey yields valuable insights into consumer attitudes as the company transitions to full commercialization. Motional is the only AV technology company operating on the world’s two largest ride-hail networks.

The survey shows that there is significant interest in driverless ride-hail services based on a number of factors including safety, customization, and comfort. Yes, Americans are excited about finally being able to ride in driverless vehicles – when asked why they would choose a robotaxi instead of a human driver, the top reason given (28%) was “to experience a new technology.” But those surveyed also made it clear that they see a robotaxi at its core as a consumer tech product, meaning future riders want new capabilities and differentiating features that improve upon the existing ride-hail experience. 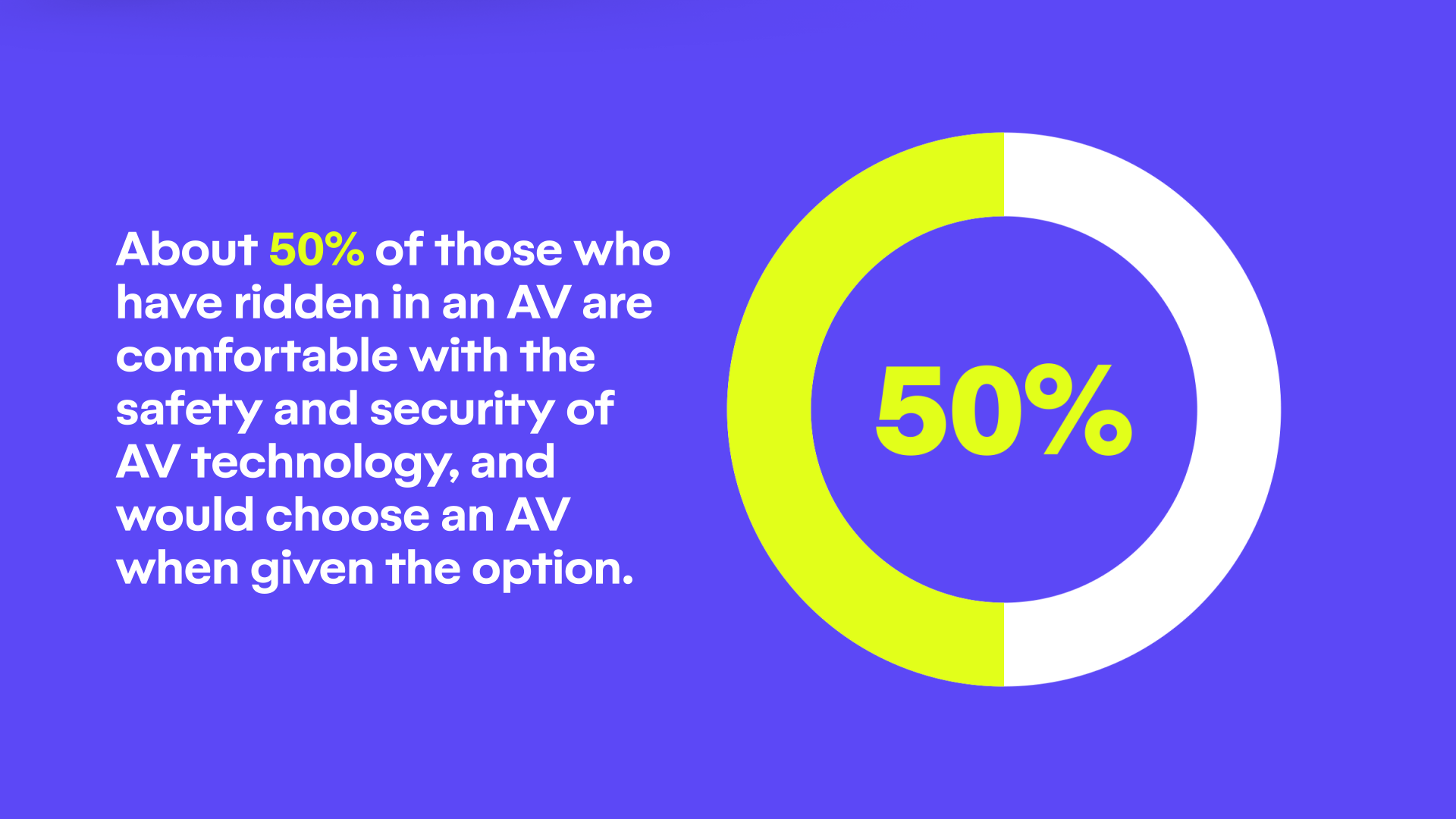 When it comes to features that allow riders to customize their experience, 56% said having those controls were important. For example, 55% want their vehicles to use AI to choose the most effective route. The same percentage also want to be able to tell the vehicle to “wait” if they were running late while getting ready.

For a portion of the consumer base, the idea of a driverless ride has an unique appeal. In addition to the 35% who would choose a robotaxi while traveling alone, 31% said they would do so to avoid special interactions with drivers, and 29% said they simply prefer to be alone. 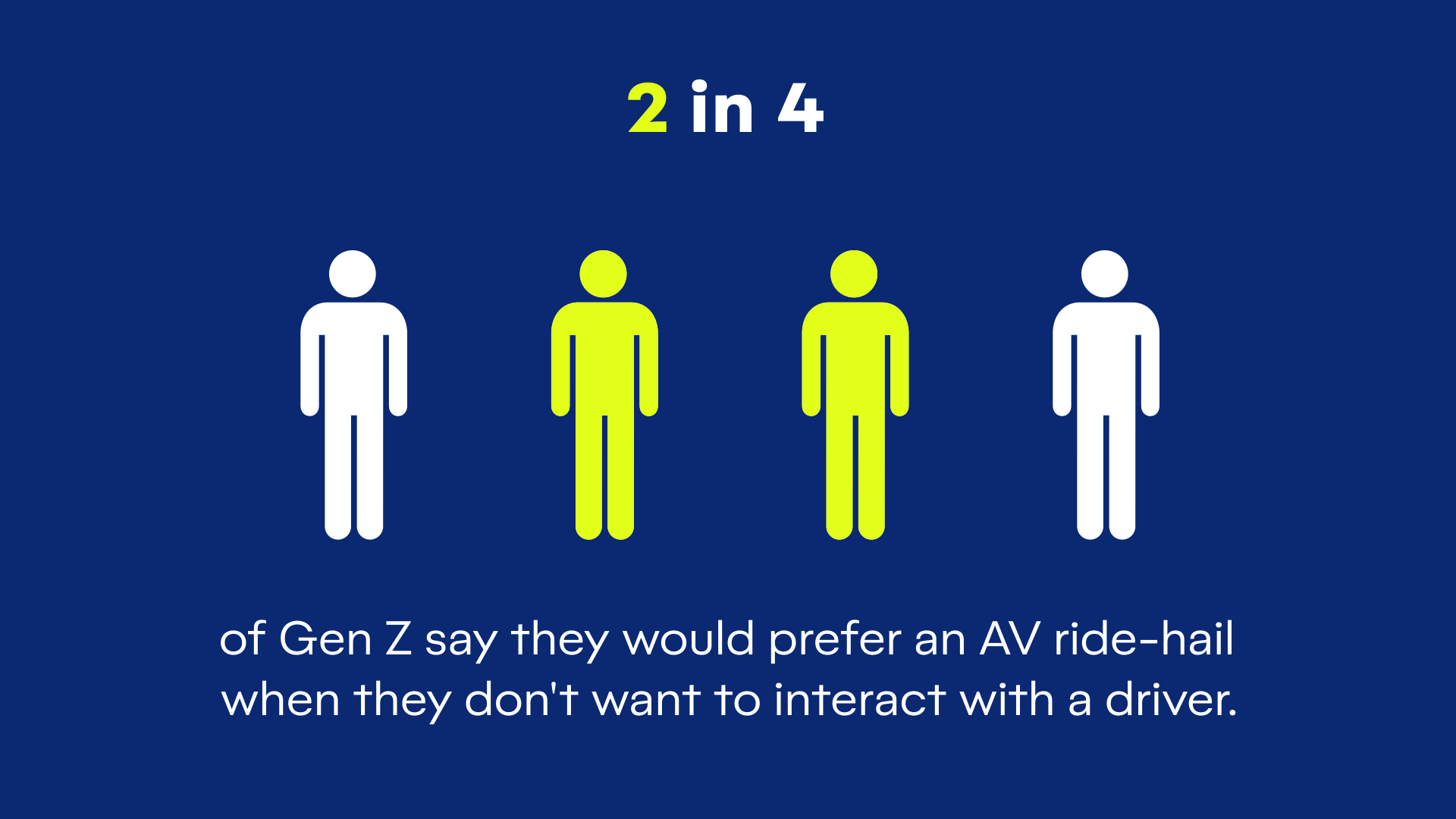 For Motional, this is recognition that everyone is different, with their own unique situations, preferences, and needs. Some people are introverted or become anxious in social situations. Others may have just had a medical procedure, received bad news, or have a strong sense of personal independence. And sometimes it's nice to have a moment of solitude in between meetings to get centered or to recharge. There may be times these people choose a ride-hail driven by a human; but there also is clearly interest in having the option to ride in a driverless vehicle.

The younger generations are especially enthusiastic about the opportunity for driverless mobility. Just 10% of Boomers, for example, are ready to choose an AV over a human driver today. But that figure doubles for Millennials and members of Gen Z. And with those latter two generations entering their prime earning and spending years, that’s a promising foundation for a still-emerging industry.

But perhaps what’s most promising is how consumer attitudes change after experiencing driverless technology firsthand. Just 28% of respondents overall said they were comfortable with AV technology safety. However that number jumps to 53% among those who have already ridden in an AV. Similar increases are also seen when asked about the accuracy of the technology, predictability, and security. This finding shows the importance of helping the public understand and experience the vehicles directly. 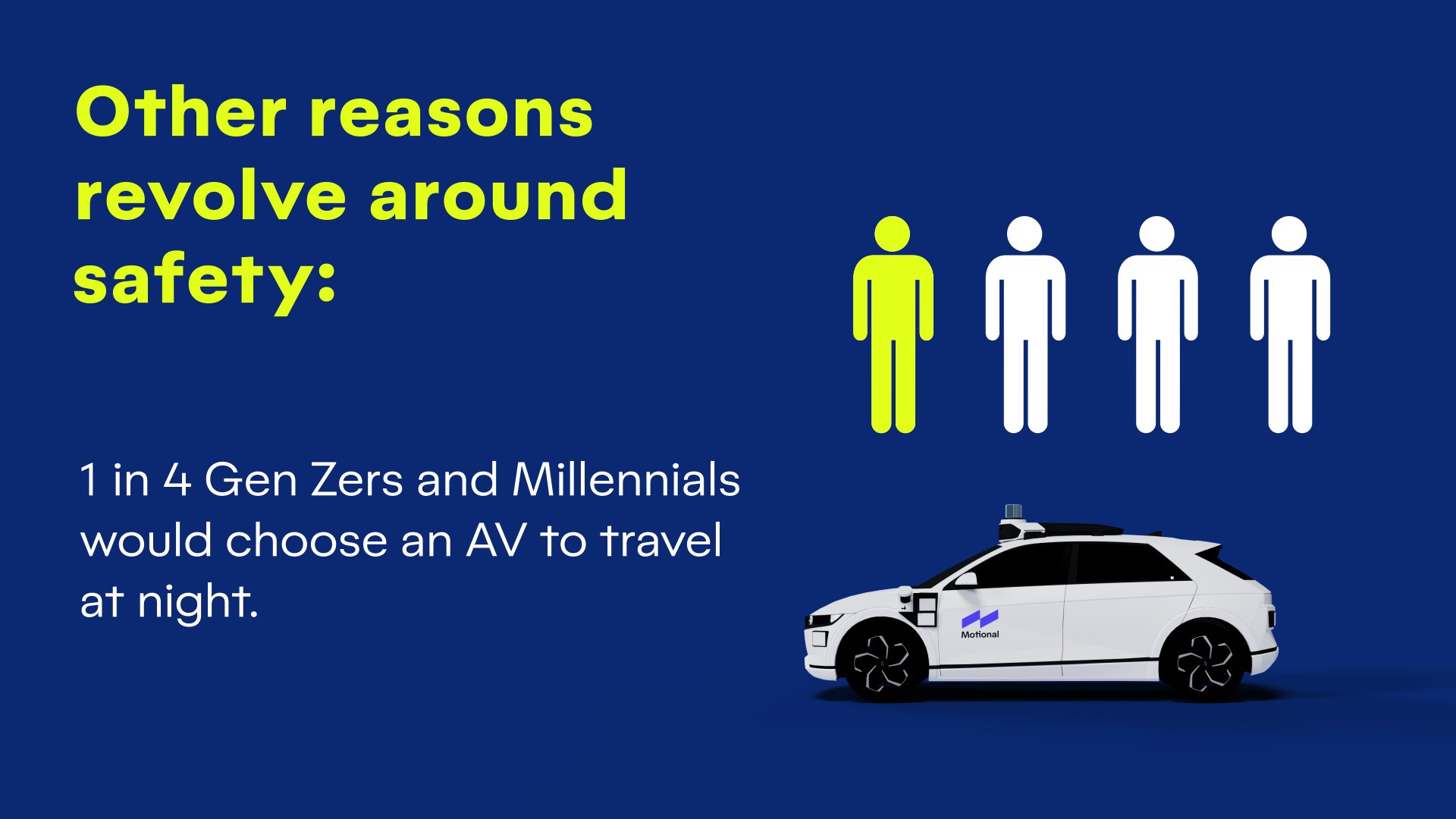 The AV industry is closer than ever to making driverless vehicles and robotaxis widely available to the public. The 2022 Consumer Mobility Report shows that, despite robotaxis only being available in a handful of cities, that interest continues to grow.  Focusing on robotaxis as a consumer tech product, capable of being tailored to individual needs, will help grow the market and turn them into an everyday experience.

Read more about the report here.

Share your thoughts with us on social media @motionaldrive